Tell Us What You Think of Cellar Door

We were thrilled to see this great write-up from Tony Love in SA Weekend last week:

The Joseph Moda coincidentally is celebrating its 25th anniversary with the release of the latest (2012) vintage, and to look back at its vinous history Joe recently opened up every one of them. The collection is a testament to the ageing ability of cabernet sauvignon (albeit in a blend with merlot), and also a fascintating glimpse into the unusual “amarone’ technique Joe employs in the drying of the grapes before they go into the winery. The drying allows flexibility to pick grapes earlier and retain their natural fruit brightness, but also prompts with age a complex array of flavours that appear like beef stock through to roasted walnuts and panforte.

One thing Joe is convinced about is cabernet sauvignon’s suitability.
“It’s a tough little berry that can withstand the more challenging years,” he says. “You get the sun-filled Australianness of the raisins, as well as an Italian aged, earthy red character which comes around the seven-year mark.” If you’re a collector and have 2010, 2004, 2002, 1999, 1998, 1996, 1994, 1991, and even the 1989 and 1988 experimentals as Joe started out on this journey, then there are wonderful thrills to be had in your cellar.'

Wow! What an honour to be ranked among the most consistently high scoring attractions on the Trip Advisor site. It's the fact that Trip Advisor reviews come from the public makes this award extra special. Thank you to everyone who reviewed us!

Win 'The Lunch of a Lifetime' with JOSEPH Moda

To celebrate the 25th vintage of our iconic JOSEPH Moda Cabernet Merlot we are inviting one lucky Amici Primo and ten of their friends to join owner and winemaker Joe Grilli for an exclusive private lunch in our  cellar door courtyard.

You could be celebrating your birthday or special anniversary in luxurious Primo style as you and ten friends share a limited edition six litre ‘Imperial ’of 2012 Moda with Joe at this exclusive ‘money can’t buy’ party. In addition, the lucky winner will have a $2,000.00 budget for travel and accommodation to share among their guests for a truly memorable trip. Three runners-up will each enjoy a magnum of 2012 JOSEPH Moda signed by Joe.

Each bottle of 2012 JOSEPH Moda purchased by Amici Primo in our McLaren Vale cellar door or via our website automatically earns one entry into this fabulous prize draw. The more 2012 Moda you buy from us, the more chances you have of winning as each bottle is another automatic ‘ticket’ in the draw. We look forward to celebrating 25 years of JOSEPH Moda with you in 2014.

Enjoy the new season's JOSEPH Extra Virgin Olive Oil fresh from the press. Nothing is more delicious than absolutely fresh olive oil, taste the difference as you indulge in a menu of olive oil based dishes accompanied by Primo Estate wines.

JOSEPH Nebbiolo 'One of Australia's Most Popular' - Selector Magazine

We are thrilled to see our 2008 JOSEPH Nebbiolo included in this month's Selector Magazine feature on Australia's best Italian varietals. The panel headed by David Hook wrote: 'The JOSEPH is one of Australia's most popular Nebbiolos and shows the variety's aging potential. Prune, currant, cassis and spice aromas introduce a palate that's beautifully developed yet still showing primary fruit including currant and plum. Its tannins are starting to soften and there's plenty more cellaring to go'.

Coat the fish fillets lightly with seasoned flour. Heat the olive oil in a frying pan and fry the fillets. Remove to a serving plate to cool.

In a non-stick pan over medium heat lightly caramelise the onions, add the garlic, peppercorns and herbs. Pour in the wine and vinegar and cook for two minutes.

Add the sugar and raisins and taste for a pleasant balance of flavour between sweet and savoury. Pour over fish, cover and allow to marinade for several hours or overnight. 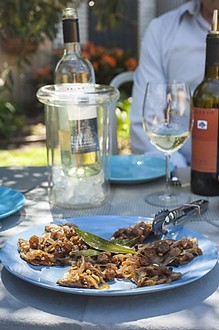 Enjoy FREE Freight and guaranteed delivery when you join our new Virginia Vineyards Unlabelled Club. If you love our great value every day drinking unlabelled wines and want to ensure you never miss out again click here to find out more - join today!